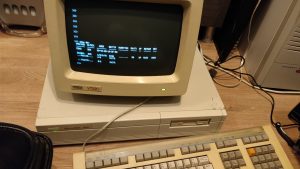 I bought this machine from eBay in October 2017. It had a leaked clock battery so I ended up cleaning that up and the machine worked fine. It probably would have worked fine before I cleaned it up as due to the design of these particular MicroVAX models, the battery acid didn’t actually reach anything on the motherboard to be able to cause any potentially irreversible damage.

I did have an RZ25E disk in this machine with ULTRIX 4.5 for VAX on it since I already had VMS running on my MicroVAX 3100-90. Currently however I have rehomed that RZ25E for another project that I will blog about in the future. So the machine currently can’t boot independently, however I did have it working as a satellite node in a VMSCluster booting from my MicroVAX 3100-90 into VMS 7.3. Eventually I would like to get a SCSI2SD board for this VAX as well and configure it to run an older version of VMS such as 5.5-2 and ULTRIX 4.5 from there.