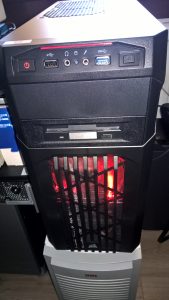 I bought this machine (just the motherboard to be precise) in February 2015 on eBay. It has a 533MHz Alpha CPU and came with 256MB of RAM originally but I have since upped this to 768MB. Originally I bought a Trio64 graphics card, DEC DE500-AA Ethernet card and Qlogic ISP1040B PCI SCSI Card for the machine and it has been in a total of three cases so far. Currently it has no optical drive as I did have an old Sun 50pin SCSI DVD ROM in there but put it in an external box to use on other machines such as my SGI Indy or MicroVAX 3100-10 as well as this machine.

In March 2017 I was fortunate enough to receive a PowerStorm 4D40T graphics card for this machine which was a big improvement over the Trio64 card with its 1280×1024 resolution with 24bit colour compared to the Trio64’s 1024×768 with 8bit colour. A sacrifice that came with using the PowerStorm card was that I had to remove the PCI sound card I had found for the machine since the PowerStorm card takes 2 PCI slots rather than one. This meant I lost my ability to run DECTalk under Digital UNIX however I already had this running on the Personal Workstation as well so wasn’t a big deal. I’d take better graphics over rubbish graphics with sound on this machine any day! The 4 PCI slots are currently taken up by the PowerStorm Graphics card, DE500-AA NIC and Qlogic SCSI card.

I have had this machine running both Windows NT for Alpha and Digital/Tru64 UNIX. However, this machine does not hold both the AlphaBIOS and SRM console in its flash ROM at once. This means that to switch between Windows and UNIX you need to reflash the ROM each time. A way to get around this I used was to set the dipswitch on the motherboard to start in emergency boot mode. What this does is force the machine to load its BIOS from a floppy disk every time it powers up. I did this until I got the Personal Workstation, after which I permanently flashed the SRM console and installed Windows on the Personal Workstation instead as it can start AlphaBIOS from the SRM Console by typing “arc” at the prompt since it stores both the AlphaBIOS and SRM Console in its ROM.

Currently the machine runs the latest build of Tru64 UNIX 5.1B6 with the latest patches from 2010 on an 18GB 68pin SCSI HDD.