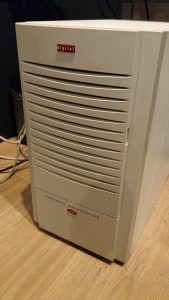 I was kindly given this machine in October 2016 at DEC Legacy. It quickly became one of my favourite old workstations and is now my main OpenVMS machine. When I received the machine it had one hard drive in it which was around 4GB in capacity and 768MB of RAM. During the DEC Legacy event I installed OpenVMS Alpha v7.3-2 on it. Since getting the machine home, I have added a further 2 hard disks (a 9GB and an 18GB drive) and installed the VSI OpenVMS Alpha 8.4-2 evaluation kit, Digital UNIX 4.0D and Windows NT 4.0 Workstation with Service Pack 6 in a triple boot configuration. I have also had the release candidate 2 build of the unreleased Windows 2000 for Alpha CPUs running on this machine as well.