Windows 1.0 on the Rainbow

At the beginning of March, I finally got round to trying to run Windows 1.0 on my Rainbow. I discovered that a different set of Windows 1.0 floppies were uploaded online in May 2017 and that these appeared to be a fully working version. I couldn’t find any publicly documented cases of anyone getting this copy working yet so this may be the first time that evidence has been posted that a working copy exists and has proper functional mouse support. (If anyone else has indeed had this working I’d be interested in hearing about it!)

I found the copy I got working on Warner Losh’s blog. As he mentions, the copies that existed before were a bit of a mismatch between the Rainbow and VAXMate versions and no one quite managed to get it working.

Since I had the graphics option board, I figured I should be able to at least get Windows working and would investigate mouse support as well. At first I used Kermit to copy the arc files downloaed from Warner’s GitHub to my Rainbow but had trouble getting them to unpack properly with the version of arc I was using. I then decided that after searching for something that could open arc files on a modern pc, to use Universal Extractor to extract the contents under Windows 10. With the files successfully unpacked, I picked out what I thought were the most essential files to getting a base Windows install up and running, then used Kermit to copy them to a folder called “win” on my DOS 3.10b partition. If anyone is interested in exactly what files I copied over from the archives, next time I have my Rainbow running I will take a note and post the details here.

Once this was done I was expecting it to fail or crash and restart to the DEC startup screen as a few things I have tried on my Rainbow have done (including a previous attempt where I tried to extract Windows on the Rainbow itself). Much to my surprise, a digital logo began scrolling down the screen with “MS-Windows 1.0 for Rainbow 100” printed underneath. At this point I did not have a compatible mouse to hand so I had to navigate using the keyboard. Below is  a video showing it working and opening the bundled clock application.

You will notice that I am using an old Mac with a capture card USB stick to display the Rainbow as it is the best solution I have found that cuts off the least amount of the left hand side of the video output. I have to change video mode for when the graphics option kicks in as well, which is why the DOS display starts half way down the screen at the beginning. Eventually I hope to make up a better video cable that supports colour output and will work on sync on green displays as my current one is just designed as a VR201 replacement so only outputs in monochrome.

According to the included text files in the archives, Windows on the Rainbow doesn’t support colour anyway so I am not missing out on much at the moment in that regard.

After having it working I tried hard to find a mouse that would work. I knew according to the included documentation that Microsoft Mice were supposed to work. I eventually dug up one of my Dad’s old Microsoft Mice which was a “Microsoft Serial Mouse 2.0a” and connected it to the Rainbow with a 25 pin to 9 pin serial adapter. Once I started Windows with this mouse connected, the mouse pointer didn’t vanish upon boot and actually moved! I managed to use the original Windows Paint with it and everything!

I am really pleased that I managed to get everything working, so below are some pictures of various bundled applications. 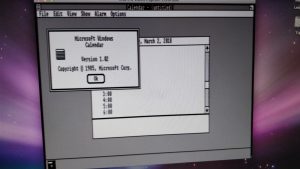 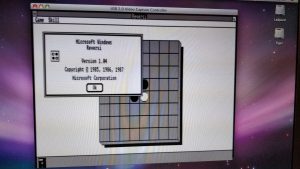 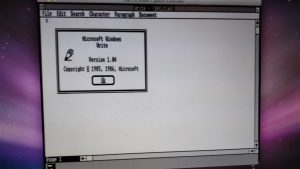