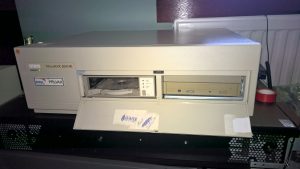 I have had this machine for a very long time and it has an interesting history as well. This machine started life as a prototype at DEC in Ayr. Unfortunately around 2004/2005 the power supply failed with a loud popping noise. It sat around for a while and sadly developed another issue where the clock battery leaked all over the board. Eventually I did get another PSU for it in March of 2014 but discovered that while it would start performing the system tests, it would always fail. 2 of the RAM boards were also killed by the battery acid and unfortunately one slot in each 4 bank set was damaged so trying to run the machine with 4 of the 8 RAM  boards was sadly not an option. I cleaned up the original board to the best of my efforts but it made no difference at all. I received a working production MicroVAX 3100-90 motherboard for my birthday in 2014 and used this to restore the machine to fully working order and later bought a couple 16MB RAM boards to replace the 2 damaged ones to max it out back to the 128MBs of RAM the machine had originally.

The machine ran OpenVMS 6.2 from when my dad last used it.  I requested hobbyist licences for OpenVMS from the official hobbyist program and upgraded this to OpenVMS 7.3 which is the last version released for VAX systems. The machine originally had 3 hard disks, an RZ26 (roughly 1GB) as the system disk and two RZ25E drives (roughly 424MB) as user disks. User 2 failed with a spectacular crunch in September 2016, and while the VAX didn’t skip a beat, all data was lost on that disk. luckily there was nothing of importance on there anymore and I had an old backup anyway. After this I replaced all the disks with a single SCSI2SD board which works brilliantly and makes the machine much quieter! For removable storage the machine has an RRD43 CD-ROM in place of the original RRD42 caddy CD-ROM drive and a fully working DEC TZ30 SCSI tape drive which is read and write compatible with TK50 media.

Incase anyone is wondering, I do still have the original prototype board. It now lives in a special custom made display case and is packed away safely in my collection!