Restoring a DEC Rainbow 100B

Back in November I acquired a DEC Rainbow 100B with a VR201 monitor, LK201 Keyboard, LA50 Printer, RD51 HDD and the vertical stand. Unfortunately the VR201 was covered in cataracts and was leaking red liquid (presumably from bad capacitors). 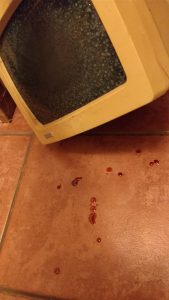 Upon inspection I discovered that the machine also had the graphics option board fitted and an official memory expansion taking the total amount of RAM up to 720K.

Before I could test the machine, I had the problem of the VR201 being dead to solve. I found a set of instructions online that detailed how to wire up a cable to attach the keyboard to the computer and use the composite input on a TV as a replacement for the VR201 display. 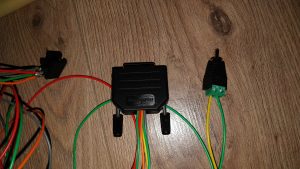 After checking for high resistance on the power cable between the PSU and motherboard and then giving everything a visual inspection and clean up, I proceeded to power on the machine. It came up first time but would give some interesting system error messages. Eventually the machine began to behave itself after a few power cycles and re-seating of the expansion boards. I was able to boot from floppy into both MS-DOS 2.11 and CP/M 1.1 although only drive B would work without reaching errors around track 67 of the disks. The RD51 hard disk refused to spin up and attempting to boot from it would result in the LED lighting up  and a system load incomplete message from the system. 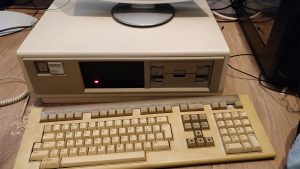 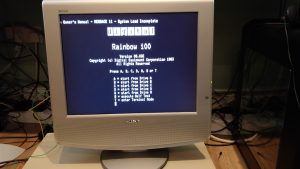 While the new video cable worked well, it did have the issue where none of the TVs that I have would display the full picture and as a result, the left hand side of the screen was always cut off making it difficult or impossible to read file listings or even see the drive letter prompts.

At this point I left the machine for a while, happy with the progress I had made in getting it working again. I returned to it between Christmas and New Year and managed to successfully revive the RD51 hard disk. I ended up removing the top cover and attempted to start the motor spinning by hand. After a couple seconds of this, the drive sprung to life and after leaving it running for a short while, I put the cover back on and put it back into the Rainbow. Upon pressing “W” to start from the HDD, I was presented with the Rainbow Hard Disk Startup menu for the first time, indicating that both a CP/M and MS-DOS partition appeared to be intact. 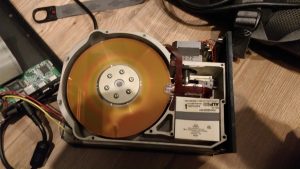 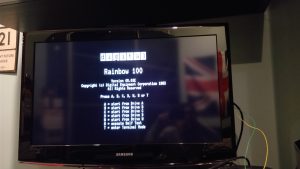 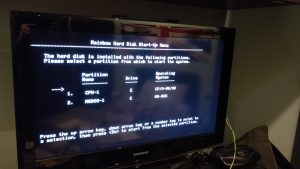 Here are a couple videos showing the Hard Disk in operation. As you can tell from the noise, it doesn’t sound very healthy but worked perfectly fine with all the original contents intact! I ended up replacing it even though it is still functional with one of David Gesswein’s MFM Emulator boards which I will talk about in my next blog post.